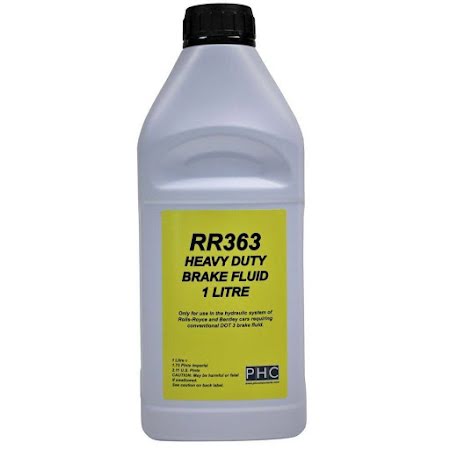 The Silver Shadow was introduced in 1965 and included a Citroen-designed hydraulic braking system, running on conventional DOT3 brake fluid.

It soon became apparent that the DOT3 fluid did not provide sufficient lubricity to this new hydraulic system. Customers complained principally of squeaks and knocks in their cars, especially from the rear height control system. Other complaints included repeat brake feel/ fade, sticking pump and valve plungers, a jelly-like build up in the reservoir, fluid leaks and swelling of the rubber components in the system.

Various alternative versions of DOT3 such as Girling Crimson, Girling Amber, Girling Green and LMA fluid, were tried without success. This led Rolls-Royce, in conjunction with Castrol Oils, to develop a superior hydraulic fluid, RR363; a synthetic glycol-based DOT3 with added lubricity provided by an additive derived from castor oil. This additive provided greater lubricity and viscosity to the fluid, which meant that it “clung” to the hydraulic units meaning that they were no longer dry upon start-up.

RR363, as with all DOT3 & DOT4 fluids, is hygroscopic, which means that the fluid will absorb and chemically combine with water from the atmosphere. Whilst it is virtually impossible to avoid natural moisture absorption into the hydraulic system it is imperative that steps are taken to avoid its effects as much as possible.

Brake fluid which is contaminated by water will boil at a much lower temperature than fluid with no water content. If the fluid is contaminated and the car brakes excessively or very hard from high speeds, there will be a tendency for the heat generated by the brakes to boil the fluid, finally resulting in vaporisation of the brake fluid and ineffective brakes. To eliminate possible contamination of the brake fluid it is essential that the fluid is not exposed to the atmosphere for more than the absolute minimum of time. It should always be stored in and used direct from small sealed containers and when the systems are replenished, the two reservoir caps and the container cover must be replaced immediately.

We therefore recommend a full hydraulic flush and replenish every two years as well as the Rolls-Royce recommended hydraulic services every 48,000 & 96,000 miles or 4 & 8 years (whichever comes soonest).

Details of these Service Schedules can be found here: